Fiber types are differentiated as multimode or single mode. Single mode was always easy for me to understand but I could never quite understand what ‘multimode’ actually meant. I’m written some notes for myself on this topic that I thought I’d share. I’m sure some physicists will have an allergic reaction to my take, but I’m happy to pay that price to learn a little more.

A single mode laser emits light that is focussed that is tightly focussed into the 9 micron core of single mode fiber. All the energy for that light pulse is concentrated into that single ‘mode’.
Multimode lasers have many ‘modes’. A pulse of light from a multi-mode laser will exit the laser at many different angles. For this reason I think of each mode as an ‘angle of light’. Note that the energy of that multimode laser is now distributed between each of those ‘modes’.

The cone of acceptance

I love this ‘cone of acceptance’ it reminds me of ‘the stone of shame’ from the Simpsons Stonecutter episode.
Ahem… so the cone of acceptance, or aperture, is the maximum angle of incident light that can actually make to the fiber core without being bounced off or diffracted (bent) out of the cladding.  Multimode fiber is has a larger core (50 microns), which means a larger cone of acceptance. This allows for the use of less-expensive short-range (SR) lasers which cannot be focussed very tightly.
Another way of thinking about this is to think of a multi-mode laser as a shot-gun, and a single mode laser as a rifle.
OM3 multimode fiber has a core size of 50 microns, which should ensure that most of the light modes from this lazily focussed SR laser actually arrive in the core of the fiber. The downside of multimode is that all of those modes need to be collected at the receiver to capture most of the energy from the original light pulse.

The limits of multi-mode – modal dispersion

Let’s take the example of a single pulse from a multimode laser. Each mode of that laser enters the fiber core at different angles. For simplicity, I have assumed three modes of ligth in the example below.

It’s hard to see but the solid red mode is travelling a greater distance than the dotted line mode, because of its higher angle of incidence. Examine the relative path lengths below:

Under normal conditions, each mode of light travels at the same speed. Therefore, if the solid red mode is taking a longer path, it must arrive at the receiver later than the other modes. This pulse spreading effect is known as modal dispersion and causes differential mode delay. 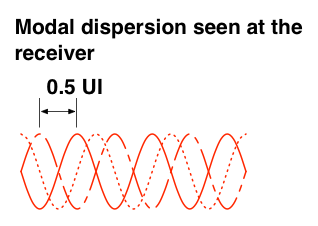 Modal dispersion is seen at the receiver as Inter-symbol interference (ISI). If the delay between modes is greater that 0.5 of a unit interval (UI) of the bit period, the receiver can’t distinguish which modes are from which symbol. Thus, modal dispersion can limit the useable bandwith of the fiber by placing an upper limit on the length of the fiber or the clocking frequency on the link.

Graded index fibers to the rescue

So.. what if all these modes (aka, angles of light) didn’t need to travel at the same speed. What if there was some strange property of fiber that would ensure that the light that took the longest path travelled ‘faster’ than that of the shortest path mode.
Graded index fiber uses gradual changes in the refractive index of the fiber core to ensure that center of the fiber core will have a higher refractive index than the outer edges.

So our ill-fated solid-red mode is now at an advantage as it spends more of it’s time at the edges of the core, and can travel faster here due to the lower index. This grading of the refactive index reduces the inter-modal delay, and all modes arrive closer to each other at the receiver.

Graded index fibers help alleviate some Modal Dispersion, but dispersion effects cannot be completely eliminated from multimode fiber. The compromise for using cheaper multimode lasers is shorter maximum multimode fiber lengths. For many that is a price worth paying.

That’s my ‘angle’ on multimode. I hope it helps you more than it confuses you. Please add your comments and questions below.

2 thoughts on “The many 'modes' of multimode”