If you need regular console port access then nothing beats a fixed console router. However there are many times when that simply isn’t an option. For occasional console connections I use a Keyspan USB/Serial adaptor with my MacBook. It’s an acceptable solution but not sometimes is far from ideal. You can find yourself tethered to the rack in question, often sitting on the floor or a crappy stool, dealing with datacenter noise and temps and have console cables traipsed across the aisles. Surely there’s a better way to do this?

After a quick search online I discovered the AirConsole, a wireless console adaptor that promised an easy ad-hoc console session without hassle of a wired connection. Simon Hope from GetConsole provided an evaluation unit and I’m finally getting time to review it.
First we should look at GetConsole, an Apple iOS connectivity app targeted at field service personal carrying 3G-enabled iPads or IPhones. GetConsole has many features such as logging, file sharing, tftp-server and even an serial-over-HTTPs tunnelling service. I haven’t used it personally but there are a lot of details on the get-console site.
AirConsole is a Wifi-to-serial adaptor designed as a companion for the GetConsole App. If you’re going to use a iPad as your primary device then the GetConsle and AirConsole pairing is perfect. You use the WiFi to connect to the AirConsole and you still have a 3G uplink the internet or your private network.
But… and know this may seem a bit old-school, I don’t want to use an iPad to connect to network devices. I like using my MacBook as my primary tool and I can’t imagine going to a site without it. Thankfully, AirConsole does work with MacBooks and Windows machines. Let’s unbox it before we look at the Macbook use case.

The standard Airconsole is priced at $69 dollars and is available from the Airconsole Online Shop (not an affiliate link). The Airconsole has a Lithium Ion battery which promises 4 to 5 hours of active use and can hold charge for 14 days when left dormant. The unit is charged via a MicroUSB port on the side and a USB charging cable is included in the package. 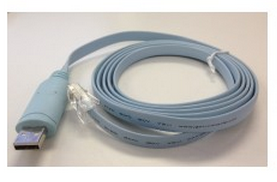 The unit includes 180cm powder-blue console cable, connecting the unit’s type-A USB port to a cisco-pinout RJ-45 connector (see picture).  If you buy the pro version (priced at $89) you also get a RJ-45 to DB9 standard and null-modem adaptors. If you’ve ever used an external USB-to-serial adaptor you’ll appreciate AirConsole’s low-profile cable. Sadly the cable has an RJ-45 connector with an easy-to-break latching tab. You can buy a replacement cable for $15, but it’s a shame they didn’t use a snagless type RJ-45 connector.
The included printed instructions off a quick jumpstart, but you need to get to the website for anything beyond the basics. There is a three way slider switch on side of the unit that confused me mightily at first. The settings are ‘off, ‘charge’ and on.  I’m not sure why, but the ‘on’ position is marked as ‘R’.  It can be externally powered in the ‘on’ position and can also charge in the powered-off state. So what is ‘charge’ for?  After some digging on the AirConsole forum, it appears that you can use the charge position to re-charge any connected device from the AirConsoles battery. That’s a pretty cool feature but it should be better documented.

The AirConsole works as a 802.11b/g/n access-point and automatically provides a DCHP IP address when you attach to the airconsole-xx AP. However I was at a loss for what do do next.  I tried to nmap the airconsoles IP address to check for open ports, but the AirConsole isn’t a console ‘server’. I should have watched this 3-minute overview first. It turned out that I needed to download an OSX virtual com port adaptor from the Airconsole home page.
Once installed you need to join the GetConsole-XX wireless network as a client and launch the ‘AirConsoleOSX’ driver app.  This will open a small window that you need to keep open for the duration of your console session. The driver app should see the AirConsole unit as soon as you join it’s Wifi network. 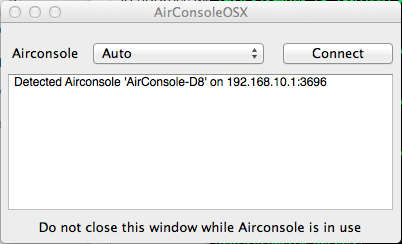 Airconsole is listening on TCP port 3696 for RFC2217 Serial-over-Telnet connections. This is how the virtual com port is implemented over WiFi.  Once you click connect you’ll get an output like mine below. 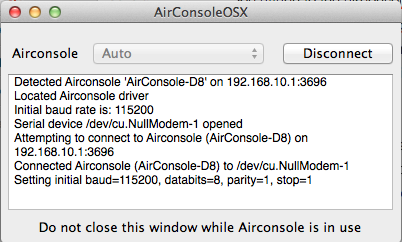 The device tells that it has connected to the serial device /dev/cu.NullModem-1,  picks an initial baud rate (115200) in this example and uses the standard 8-N-1 settings.  I use screen as my console-app, but first we need to check the available serial devices in /dev. The one you want is /dev/tty.Airconsole-1 as you can’t connect to NullModem-1. You must also choose the right baud rate for the console port of the target device.

Assuming you get the baud rate right you’ll be connected to your target device as if you were using a standard serial cable.  Hey, someones stolen my CompactFlash card!!

Although the setup for the Macbook isn’t the smoothest, I still like the AirConsole and would recommend it. I love the convenience of sitting in the kitchen and connecting to a router in my lab upstairs. However constantly switching between the Airconsole AP and my home Wifi network for internet access is a pain-point. It does seem like an AP client mode would solve that problem for me and thankfully it’s on their roadmap.

UPDATE: This review was written in 2013 for AirConsole 1.0.  Since publication, AirConsole 2.0 has been released. I encourage you to visit the air-console page to learn the latest product news.